Menu
Elkhart’s River Greenway Trail is nearly complete and is an exciting and important piece in connecting both our local and regional trails and pathways.

The city of Elkhart received $642,600 from the state of Indiana to help fill in gaps in the long-planned trail. This project will span 4 miles when complete, paving 1.8 miles of existing gravel trail between the Elkhart Environmental Center and Studebaker Park. It adds just under a mile of new trail, reconstructs areas of sidewalk and signs low-stress streets to complete the connection to American Park and the Riverwalk.  The additional trail is not only through a wooded area with a lot of wildlife, but also separated from the roadway and therefore safer.

The project connects to the Mapleheart Trail at Lusher Avenue (and Elkhart Environmental Center), so it’s a key piece in connecting downtown Elkhart and Goshen. Once in downtown Elkhart, just 5 miles remain to complete a connection into St. Joseph County, which would be regionally significant.

The trail was planned in 2017 and initial costs were $1 million in 2019, but over time as inflation pushed costs higher, more money has been needed. Recently, in part through a $100,000 grant by the Community Foundation of Elkhart County’s connected network of trails initiative, the project is once again fully funded. 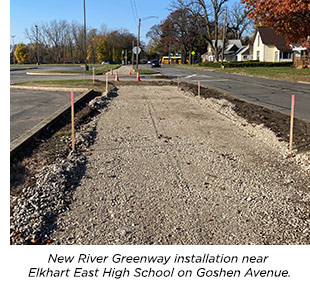 “We hope to look at where else we can put in bicycle infrastructure that would allow for people to feel like they can ride around safely,” Elkhart Park Superintendent Jamison Czarnecki told The Elkhart Truth when the grant was received.  “We want to support getting people out on their bikes and with their families and one way we know people want to do that is by having a safer p

lace to bike. So, these types of improvements are wonderful additions to making that happen.”